An Esoteric Translation and Commentary

When Yohanan was asked who he was by the priests and Levites that the Jewish leaders had sent, he did not hide the truth, but freely said, “I am not he – not the Messiah.”  So they asked him, “Then who are you? Are you Eliyahu?”  He said, “not I.”

“Are you then the Prophet?”

Finally they said, “Who are you? What shall we say to those who sent us? What do you say of yourself?”

Yohanan quoted Isaiah the prophet, “I am a voice, calling in the wilderness, ‘Prepare the way for the Lord.’ ”

Now the Pharisees who had been sent to question him said, “How can you baptise if you are not the Messiah, nor Eliyahu, nor the Prophet?”

“With water I baptise,” Yohanan replied, “but there stands among you one unknown. He is the one that will follow me and that is ahead of me, and I am not even worthy to untie the sandals on his feet.”

This occurred in Beth-Anya on the far side of the Jordan, where Yohanan was baptising. 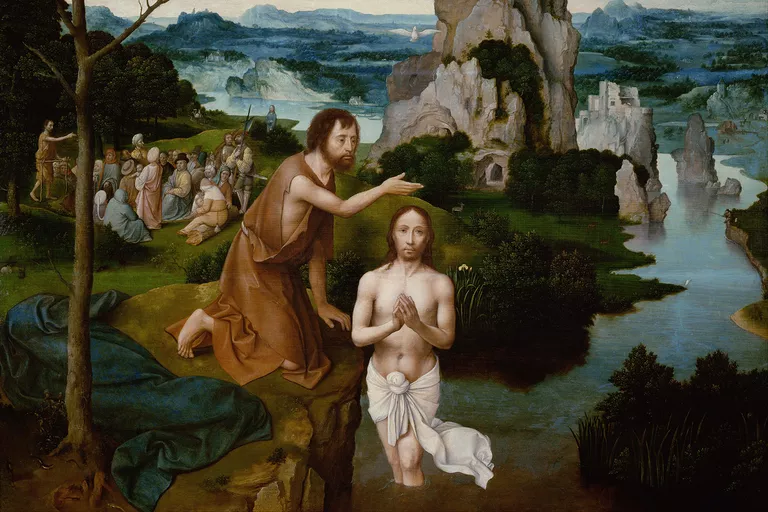 Yohanan – The name became ‘John’ in English through a process of mispronunciation across several languages – Aramaic to Greek to Latin to English.  This transformation of names affected all the names in the new testament – some worse than others.  Yohanan or ‘John the Baptist’ was a forerunner of Yeshua/Jesus whose message is the oldest version of ‘The end of the world is nigh’ that I have ever come across.  He encouraged people to cleanse themselves and live righteously in preparation for the coming Judgement.

Priests and Levites – The Levites were a Jewish tribe that were the only group who could become Priests and serve in the Temple.  Not all Levites were Priests, but all Priests were Levites.  The Priest class has completely disappeared from modern Judaism with the destruction of the temple, and been replaced by Rabbis (Teachers rather than Officiators).  The Levites still exist as people with the surname Levi, who still have some special roles in Jewish ceremonies, albeit very minor, small roles.  Their importance has been lost, and Judaism has become much more focused on the practices of the individual rather than on the sacrifices performed by the priests.  Interestingly this is reminiscent of some of Yeshua’s teachings, and one could consider to what extent modern Judaism was influenced by those teachings.  In the same way that although in India Buddhism is not very popular, the basic principles of mindfulness the Buddha taught have become a strong part of the Spiritual Tradition.  Perhaps the great prophet’s teachings were influential enough to be taken on even among those who resisted them.  I would like to think so.

Messiah – meaning the Anointed one – the one that was blessed with oil.  In modern English we would say ‘The Chosen One’.  The Jewish conception of this Messiah figure was someone who would lead the Jewish people back to greatness, restore their independence, and perhaps also be some kind of Prophet or spiritual guide for their new Golden Age.  The expectation was something much more political in nature than we see in Yeshua (even though Yeshua was quite political), and certainly they were expecting someone who would strengthen and build up Judaism rather than challenge it in such a profound way.  The Gospels put a lot effort into supporting the idea that Yeshua was the Messiah, probably in an effort to put his work into a context that the people of the time could understand.

Eliyahu – Eliyahu is an old testament prophet who is most famous for the possibility that he was abducted by aliens.  The story tells of him being lifted up into heaven in a chariot of fire (does that sound like a UFO or what?!), and because of this that he was never seen dying, but rather being raised up to heaven there are some stories that perhaps he is still alive, and will come back, or even that he does come back to help people when he is needed.

The Prophet – in Deuteronomy 18:15 Moses promises the people that there will be a Prophet in every generation who will guide the people in the same way that he did.  Some feel that the time of Prophets has passed, but others would say that if you look around you will find a constant string of Prophets who may or may not be recognised, but who guide the people with their wisdom.  Yohanan claims not to be this Prophet, but he does seem like he has a lot of the qualities we would expect from one.

Pharisees – The Pharisees were a Jewish sect at the time that was very influential, and very focused on following the letter of the law.  The closest thing we find today is orthodox religion with its focus on doing what we are told is the right thing without much inner exploration or soul searching.

Baptism – Baptism is clearly based on the Jewish practice of Mikveh – ceremonial cleansing which could be done either in special bath houses (with water at body temperature and special processes to maintain the purity of the energies) or in natural water sources – streams and pools, which of course keep their purity of energy through other means.  Baptism has extended this concept to a spiritual cleansing that while similar seems to have a different purpose, and possibly a different effect.  The key difference being the frequency.  Baptism tends to be done once, or at least rarely whereas the Mikveh was (and in some cases still is) attended regularly to regain spiritual purity.

As Yohanan baptised and cleansed the spirits of the people in his day, and as Yeshua baptised and cleansed with the power of the holy spirit, so may I be showered by the healing waters of eternal life, and the pure light of God that all dross and imperfections may be cleared away, and I may be blessed with the light and love of God.  Let it overpower the darkness.  Let it spill over in my heart and shine into the world.  Guide me in the ways of true love and light, and in this way may the Holy Spirit bless me and elevate me to share Divine light through the world.